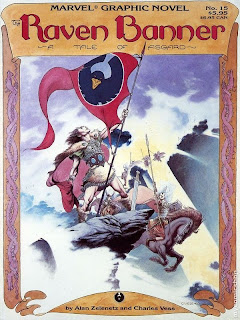 At the beginning of 1983, Marvel editorial contracted Alan ("Alien Legion") Zelenetz to work on "the Mighty Thor". The writer was previously affiliated with the character in a couple of annuals, and the bulk of his short run (#329-336) ended up serving to wrap up the departing writer Doug Moench's plot threads. And while he was dealing with the status of Thor's former lover Jane Foster, the writer was also beginning his collaboration with Charles ("Sandman", "Stardust") Vess on a couple of related side projects.

The duo first collaborated in "Marvel Fanfare 13", on a short story featuring supporting characters Warriors Three. The simple dynamic of splitting the three archetypes before reuniting them again, in order to deal with the quest of finding an Asgaridan poet, worked in a much different way than Zelenetz's main superhero Thor stories. Namely, under Vess' inks, the fairy tale stylings came to the front and contributed to a refreshing diversion. It was a given then that the duo's next collaboration, that Vess colored "Raven Banner" graphic novel, would present the creative team in a much more prominent manner.

Restricted from worrying about Thor continuity, Zelenetz was free to craft his Norse mythology story in a way that could provide him with a unique creative opportunity. With a few exceptions, the Marvel graphic novel imprint on the whole didn't provide for a lot of lasting genre classics, making "the Raven Banner" an interesting curiosity to the modern reader, particularly a Charles Vess fan. Perhaps the shift in the industry, with the new publishers open to embrace the non superhero genre work made Marvel a less sought after home for original work, otherwise it could simply be the case of a non favorable contract, even when compared to the rules governing the company's own "Epic" imprint. In any event, by the end of 1983, in Walt Simonson the company has found a new creative force that finally brought Thor back to the forefront of the industry, with Zelenetz relegated back to writing the character in Annuals, while waiting for Vess to complete the artwork on the graphic novel.

In 1985, the collaboration finally saw print as a 60 oversize page European style album, every bit as striking as Vess' work on "Sandman" and Jeff Smith's "Bone". The chief difference being that those early creatively controlled titles allowed for different interpretations, while even the much lauded Simonson Thor stuck for a large part with the Stan Lee/Jack Kirby interpretation of the mythology. For what it's worth, Zelenetz's idea surpasses the limits of a typical "Tales of Asgard" back-up, and functions as a story in its own right, populated largely by new characters that are inspired by the context of the Norse myth.

Despite the cameos of Thor and the Warriors Three, Balder plays the largest role in the plot, having persuaded Odin to let him accompany the hero in training. The quest itself deals with the prophecy concerning the myth of Raven banner, a flag that guarantees victory to the side that wields it, at the cost of certain death of its immediate bearer. Fittingly, the book opens and closes with the red-hued scenes of battle, that suitably portray the gravity of the proceedings and the the grandeur of Norse mythology. Zelenetz's story starts as a valkyrie take the current wielder of the banner to his warrior's reward in Valhalla, forcing on his son, and her betrothed on the quest of retrieving the flag and ending the giants' siege of Asgard. Yet, despite the valkyrie's urgings, Greyval Grimson is content to enjoy the start of his marriage and leave the glory to his cousin Horskuld, who takes the ways of the warrior much more seriously.

It is only when he meets with Balder the brave that Greyval starts seriously considering the quest after the Raven banner, again only to please his new bride. The reluctant hero starts late on his quest, and overcomes his first foe through trickery and cowardice, but even this is enough to win some of Balder's respect. Unfortunately, the physical model Vess uses for both Greyval and Balder differs very little when it comes to facial features. And while the classically trained artist excels at every turn even this early in his career, his lithe fantasy characters are usually alternating between a limited set of expressions. Reading "the Raven Banner", one can't help but think that Vess' strengths primarily lie in his adequate character designs, clear compositions and beautiful backgrounds, which still convey a very rich and vivid fantasy experience.

Interestingly, both writer and artist seem particularly inspired with the introduction of a third cast member, a comic relief anthropomorphic otter Oddbrand, who takes over the increasingly heroic Greyval's former role and provides welcome comic relief. With lines such as "Oh please, master Greyval, I'm an otter of minimum courage", Zelenetz endears the simple creature to the audience, while never allowing him to undermine the plot.

Truthfully, it is only with the visit to Valhalla, where Greyval meets his brave father, that the pace picks up, and by that moment the reader is already at half point in the book. This necessitates a three page montage designed to show some of the protagonist's exploits that the book simply had no space to showcase in detail (while presenting the reader with Vess' redesign of Hela). The atmospherically paced book only then returns to Horskuld's role in the plot, as Greyval's cousin's own voyage to retrieve the banner takes a surprising turn.   The juxtaposition between the two could have provided a book with a much stronger through-line, but Zelenetz decided against it, well aware of the restrictions both Marvel and Vess' elaborate style placed on the page count. 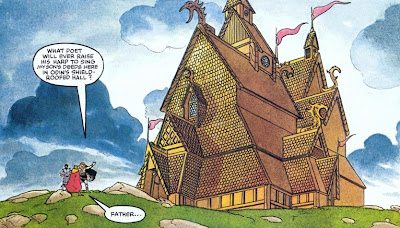 Likewise, a long running plot involving the trolls really starts to compliment the work in the last third of the book, as they confront both Greyval and Horskuld, who react in very different ways. With Balder's exit, Grimson's hero journey is almost complete, as he confidently takes Oddbrand with him to confront the mysteries of the World Tree. In using the most prominent Norse mythology settings Zelenetz provides for a multitude of  lovely images, but at the cost of the plot that almost uses dream logic to connect these disparate surroundings. For a start, only but the most ardent fans of medieval literature will be taken aback by the copious amount of dialogue spoken in the approximation of the archaic dialect, with frequently only Vess' stunning work to tied them over to a more interesting part of the story.
By its climax, the patient reader is awarded a really uplifting sequence of high fantasy storytelling involving Greyven confronting his cousin for the sake of Raven banner as well as his betrothed's hand. Bringing the valkyrie back into the story as a damsel in distress seems somewhat forced at the start, but Zelenetz succeeds in convincing the reader of the importance of the plot point, given Horskuld's previously established affection for the beautiful warrior woman. The creative team even finds a place for Oddbrand to contribute to the adventure with his own brand of heroics, thus by the time of the final battle with the giants, Vess is allowed to brighten up his palette and depicts a clear victory for the forces of Asgard.
The graphic novel comes full circle, and while the high fantasy theme prevents further elaboration about the mortality of its principal characters, the lack of a deeper psychological depth doesn't really hurt "the Raven Banner". Zelenetz and Vess have ended up crafting a very wholesome and satisfying work breaking from Marvel's tradition of using Norse mythology in superhero stories, and it's certainly doubtful that they would have achieved such a creative success by using Thor as the protagonist.
At the time when Simonson was achieving widespread acclaim in integrating the Norse myth with the Lee-Kirby superhero formula, Zelenetz and Vess have likewise opted to trust their own creative interpretation and produce the best possible work, given the circumstances. Of his own additions to Marvel's "Thor", Zelenetz uses but a map featured in the back of an Annual, a monster defeated in passing and Gullinbursti, Freya's pig that features prominently in the last part of the story. Otherwise, "the Raven Banner" is a completely new story, feeding on the mythology and divorces from the writer's brief association with Thor, except for the fact that his role as the scripter probably enabled Zelenetz to be in the position to pitch the project.

It's easy to say that a reader drawn to the graphic novel because of Vess' contribution would tolerate almost any kind of story, but judging from the finished product, it's clear that the artist enjoyed the experience beyond the possibility of showcasing his work. The creative team collaborated once more, working in the same milieu, when they returned to "Marvel Fanfare" for a four part Warriors Three adventure. This time colored by Elaine Lee, Vess' work looks adequate but is employed to illustrate a much lighter story. Following the structure of their original "Marvel Fanfare" collaboration, Zelenetz puts each of the Warriors Three through the same fairy tale scenario, before reuniting them to combat the threat posed by a postponing of the wedding. Full of modern slang and lighthearted, the story spotlights Thor's three companions and provides some wonderful Vess imagery, but otherwise doesn't try to approach the ambition behind "the Raven Banner".

In a way, returning to the Warriors Three and the start of their collaboration, Zelenetz and Vess have come full circle when it comes to presenting fantasy through Marvel's "Thor" brand. Both have since went on to successful careers outside comics, but "the Raven Banner" definitely marks an early creative highpoint. Even if today it mainly maintains nostalgic value, as a reminder of an earlier, more experimental Marvel, that published graphic novels as a concentrated effort in trying out an European flavored approach to form, the Zelenetz and Vess effort reads like a story in its own right, and not merely a marketing ploy attempted to exploit the character's cross-media popularity. To date, only the pair's Warriors three material has seen been brought back to print, while Greyval Grimson and his much more elaborate adventure has yet to be republished.
Posted by Vanja at 8:18 AM