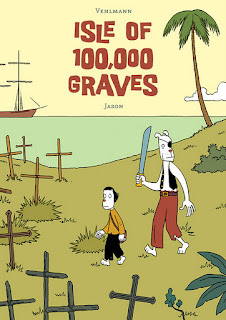 This year, Norwegian cartoonist Jason's annual effort has been a collaboration with script writer Fabien ("Seven psychopaths") Vehlmann, marking the first of the creator's original work that has not been completely authored. The master stylist has been behind some of the more amusing albums in recent years, such as "I killed Hitler" and "the Last Musketeer", providing an easy entry point into the world of avant-garde comics publishing. "Fantagraphics" provides the American edition, translated by Kim Thompson, and lettered in a signature style the publisher uses when it comes to the France-based creator's works.  Breaking for a more mainstream presentation, Jason eschews using a genre mash up technique, preffering to simply apply his deadpan minimalist style to a pirate story.

Just utilizing his signature antropomorphic characters seems enough for the artist this time around, with even the usual gags inspired by silent movies and early animation gone, perhaps due to the presence of Vehlmann. In a way, the addition of a separate writer leads to a natural reliance on dialogue as the source of the book's humor, but it's clear throughout that "Isle of 100,000 graves" is primarily a Jason vehicle. Fabien seems simply content to spice up the atmosphere and provide a bit of a break from Jason's traditional work routine, providing the artist was happy with the collaboration.

In any case, what registers on the page is some very strong and confident storytelling, in service of a purposefully generic, and in turn widely accessible story (albeit one that still offers its fair share of distinctive eccentricities). In a way, such honest and wholesome production leads to pages that work both as pieces of narrative contained to their own frame, as well as chapters in a longer work, that is paced somewhat slower and more traditional than Jason's previous albums. The simple emotional truths concerning lonely people finding love in unusual circumstances, again lead to surprisingly heartfelt melodrama. It is unfortunate than that the somewhat uneven tone proves the "Isle of 100,000 graves"'s biggest problem. 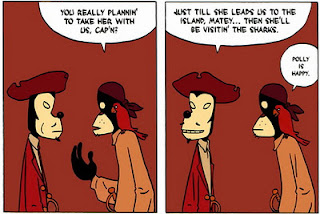 Despite the plot clearly following an updated pirate story, the creators see fit to introduce a secret society of expert torturers, who come to dominate the proceedings to such an extent that the pirate connection disappears until the very end. In a way, seeing the cute little torturers with their red caps learning about killing and maiming almost turns the whole work into a typical webcomic, aimed at playing an unorthodox occupation as completely mundane. Somehow the extended focus on these faceless characters never amounts to anything approaching the wit and charm it's supposed to project, and comes of as long-winded and largely tangential to the point of the story.

Considering that the Hangman society has actually devised the legend of the Isle of 100,000 graves with the specific idea of luring the pirates to delight in their pain, perhaps the main plot was simply too brutal to begin with. Yet, with the protagonists being little Gwenny the wanna be pirate and Tobias the torturer in training, it stands to reason why there is little actual violence in it. Vehlmann and Jason do eventually end up showing the brutality behind the faceless bureaucracy, essentially dooming the pirates whose torture has previously mostly been referred to as off panel in-joke. Yet, for all of the trouble with balancing the torturers into comedic foils, little Tobias emerges as a very believable and likable character, justifying his role of the co-protagonist. The underachieving student at Hangman Academy has trouble with his emotions getting in the way of his duties, making the connection he strikes with "the ugly little girl" that much more believable.

Gwenny is likewise depicted as very smart, with a clear agenda of searching for her missing father using all possible means, which Vehlmann and Jason turn into a real emotional center of the story. Likewise, the book falters into stylistically uneven in an early scene involving her psychotic mother, that seems far too cruel and harsh for what follows, so that when it's eventually referenced in the epilogue it seems to have come from a different comic altogether. 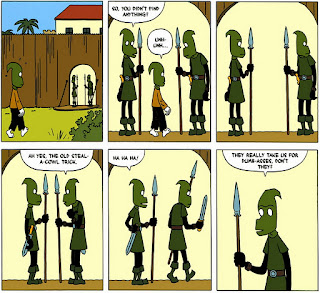 Considering the many charms of the comic, and the continuously strong craft employed every step of the way, perhaps it's protracted length seems to have ended up going against it. The establishing of the premise, the arrival on the island itself, as well as the subplot concerning Gwenny and Tobias, along with the aforementioned final scene, all seem very strong and sweet, maintaining the typical Jason presentation. It is only in some of the excesses trying to exploit the most of the premise that the album works against the reader's goodwill.

Perhaps the greater focus on pirates would be placing an expectation for a more traditional story that in itself would be to asking to have Jason undercut his offbeat style. Yet, such as they are, the story's key roles of master Hangman and the ship's Cap'n still seem underdeveloped, with their quirks noted but not really elaborated upon.

Most fascinatingly, the creators seem to have instinctively spotted and commented on this shorthanding of characterization. Where a lesser narrative would have artificially added depth to these authority figures by revealing the connection to the girl's father, Jason and Vehlmann actually use it as the premise of perhaps the best joke in the book, working to considerably reassure the readers into being patient with the work. Interestingly, the very elaborations that outside scripting gives to a typical Jason story also serves to smoothen some of the quirks that have left a portion of his audience unsatisfied with some of his previous efforts, categorizing them as slight and jarring stories ending in a very abrupt way.

That kind of disconnect is avoided here, as Fabien Vehlmann makes the story very accessible to the reader who is not already in tune with Jason's sensibilities.This kind of commercialism often leads older readers to feel left out in view of a less risky and more typical presentation. And while it's hard to criticize artists for wanting to reach a wider audience by refining their style to appeal in a more traditional and obvious way, "Isle of 100,000 graves" thankfully sidesteps the more egregorius examples due to his newest album still being a pleasant surprise, as well as a primer for the new readers who will earn a lot by discovering some of his previous work.

Perhaps his latest effort can best be summed up by focusing on the development of Gwenny's unnamed pirate friend. The one eyed man playing a typical sidekick role is introduced as a lout who her due to a charming bit of trickery on "the ugly little girl"'s part, but quickly outlives his usefulness as anything other giving her someone to talk to. Yet, even after Gwenny meets Tobias, the older pirate remains a dim witted grown up, clinging to the gag that introduced him as the sole remaining point of characterization. Even his ineptitude doesn't serve as a set up for more then a few throw away gags. Once the protagonists finally get off the island, their pirate companion is disposed of in a strangely final way that contributes to the uneven tone of the album. Having finished their work, the creators opt to leave behind an unnamed character whose potential was wasted on account on giving faceless torturers a few more chances to fascinate the reader with a concept that never sets off, no matter the color of headgear.

Worse still, the pirate's very presence leads to a sense of confusion, as Jason uses a very similar looking design of a dog-like character appearing in a crucial new role, risking to confuse the reader in the otherwise flawless epilogue. As noted, the very ending redeems many of the story's problems, leaving behind a largely satisfying experience, surprisingly showing a mature outcome of Gwenny's search. That Vehlmann and Jason manage to bridge the huge climatical action set piece with a finale that wraps up the book's emotional arc with sweetness and dignity, shows them both as mature storytellers, whose upcoming work is certainly worthy of the reader's attention.
Posted by Vanja at 2:40 AM